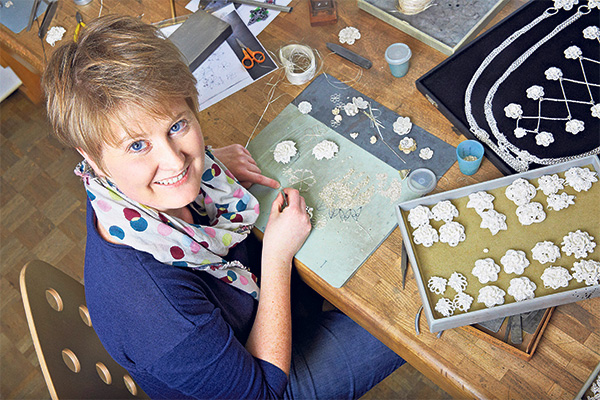 Marion Geissbühler was born in 1979, in Bern (Switzerland),and was introduced to the art and craft of the goldsmith by her father, a goldsmith himself, at an early age. She grew up, submerged into the craft, in a household integrated into workshop and store. Marion Geissbühler completed her diploma as a professional goldsmith in 2000. She attended the Hildesheim Metal Design Department from 2004 – 2005 and received a scholarship for a semester in Paris in 2006, where she focused on the process of her own design. Since 2007 Marion Geissbühler has worked for various goldsmiths in Switzerland and in Ecuador. In 2015, she stepped in her father’s shoes and took over the family business in Konolfingen, Switzerland, where they create modern and traditional Swiss jewelry. Responding to the material and entering into a dialogue with it is the onset of her work. Her creations are rooted in solid craftsmanship and her inspirations come from the traditional filigree and goldsmith craft, which she constantly challenges and applies in its freest forms.